You Are Not Your Hair

Representative Ayanna Pressley has revealed to the world her battle with alopecia.

We’ve all heard this saying “you are not your hair” before, right?  But really, are we not?  As women we pride ourselves in the ability to fix our hair the way we choose to fix it – long, short, black, blonde, brown, you name it.  And if you are a black women we have a variety of styles we like to explore such as weaves, wigs, braids, twist, amongst many others.  For Representative Ayanna Pressley, she says however,  “but I still want it”.

In a very open and bold interview with The Roots, Ayanna Pressley shares of her struggle with alopecia and reveals her bald head to the world for the first time.  She says that she recently discovered her hair struggles while getting her hair redone late last year when it was brought to her attention of some patches and in a matter of a night, she was completely bald.

According Representative Pressley, about five years ago she began a transition with her hair styles when she had some Senegalese Twist put in her hair.  Rep. Pressley goes on to state that this was indeed when “she met herself for the first time”.  As you can imagine she knew who she was along, but she however was referring to the being comfortable with the style of hair she chose to wear.  Even though this was at a time where she had a personal come to Jesus moment, she was not expecting however, the applause from girls and women like herself and the emancipation she offered them to wear their hair just like her.  Isn’t that what happens when a woman takes a bold step in a direction that others only dream of?  You give them the permission to take the first step.

From the time that she was made aware of her hair falling out she said that she would “wake up every morning to a sink full of hair” and every night she would use all the “tools” given to us as black women to stop her hair from falling out – until her hair completely fell out.  She says that she felt completely “naked, exposed, vulnerable, embarrassed, and ashamed” as we often do as women who have a sense of pride in themselves.  Not pride in an arrogant way, but the pride of being a woman.  She even went on to say that she felt as if she was in a “cultural betrayal” because of the little girls who looked up to her and because of the tribe that she has built because of her hair style choices.  She didn’t want to let anyone down or make them feel like they can no longer wear their hair in the styles of their choice.

As women, in society, no matter the race or texture of hair, our hair represents our dignity to us – it clothes us and makes us feel secured.  For Rep. Pressley she obviously feels the same.  Loosing your hair can feel like “loosing a limb” when you don’t want to loose it she said.  Sure, many women cut their hair low and some even go as far as being bald but, by choice. Rep. Pressley didn’t make this choice, it was made for her.  She said revealed this very personal aspect of her life so that she can reveal “the secret and the shame that comes with the secret” to the world and wanting to be free.  She said that she in making peace with having alopecia and is making progress everyday and that this is about self agency, power, acceptance.

Revealing to the world a new and unwanted look for Rep. Pressley would have been assuredly scary and embarrassing for her however her ounce of courage to bear the shame and tell her story is the premise of Your Purpose Living.  Your Purposeful Living prides itself in women coming to the forefront with their stories, no matter the shame and disappointment to help elevate the lives of the next woman.  It is also freeing for the woman to share their story.  In her candid interview she mentioned that she feels more of herself when she is not wearing her wigs.  Her story is powerful.  Her story is impactful.  Her story is her Purposeful Living!

Representative Ayanna Pressley, you are bold and beautiful!  Thank you for showing courage and sharing your story with the world and liberating others to do just the same.

As a Black woman, the personal is political. My hair story is no exception. Sharing a very personal story today to create space for others: @the.root

Featured Image from The Roots 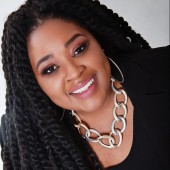 Adeola Adunni is the Founder and CEO of Your Purposeful Living. As a Mindset and Purpose Coach she desires to see women live out the life that has already been destined for them despite any challenges or setbacks they may have experienced on their journey. She takes women from a state of delay and disappointment into achieving faith, purpose and fulfillment to become their highest self and reach their highest potential.